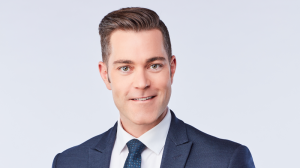 Scott Roberts is the co-anchor of CTV Vancouver’s flagship newscast, CTV News at Six, alongside Mi-Jung Lee. The newscast was named Canada’s Best Local Newscast two years in a row, in 2020 and 2021, by the Radio Television Digital News Association. It was also honoured with the highly prestigious Edward R. Murrow Award in 2021 for Best Newscast and Best Breaking News in the International category for its coverage of the COVID-19 pandemic.

Scott is a multiple award-winning journalist, who joined the CTV News Vancouver newsroom as a reporter in April 2012. Since then, he’s travelled throughout the province to cover some of the most high-profile stories in B.C. and uncovered ground-breaking investigations.

In 2020, while anchoring the nightly newscast, Scott was honoured with two Edward R. Murrow Awards for his reporting. He won Best Investigative Reporting for breaking the story of the tragic death of Vancouver Police Const. Nicole Chan, who died by suicide following relationships with two supervising officers. One of the offending officers retired early, the other was ordered fired in a rare move by the Office of the Police Complaints Commissioner. The coverage was also honoured with a national RTDNA Award and a Jack Webster Award nomination.

Scott was also a lead member of the team recognized with a Murrow Award in 2020 for Best Continuing Coverage of the B.C. legislature spending scandal. Scott secured several exclusive interviews and documents shedding light on the saga, in which both the clerk and sergeant-at-arms were dismissed from their high paying roles in an unprecedented move by lawmakers. The clerk was later charged criminally.

In the summer of 2017, as wildfires raged in several B.C. communities, Scott and Mi-Jung co-anchored comprehensive coverage that earned the CTV News team the award for Best Newscast in B.C., as well as the Edward R. Murrow Award for Best Breaking News.

In 2015, after anchoring a weekend newscast, he rushed to Tofino when a whale watching vessel capsized, killing six people, mostly U.K. tourists. He spent days covering the story, including live reports for ITV’s Good Morning Britain. It earned him the RTDNA Award for Best Breaking News.

Scott is a five-time Jack Webster Award nominee, and one-time winner. He was nominated for a special series on oil pipeline concerns, travelling to Battle Creek, Mich., to investigate an Enbridge oil spill and how it could affect a pipeline proposal in B.C.

He was also nominated for an exclusive series on animal abuse uncovered by hidden camera footage at dairy farms in the Fraser Valley, which earned him an Edward R. Murrow Award. And he won a Jack Webster Award as part of the news team that investigated the murder of 17-year-old Serena Vermeersch, uncovering information that her killer should never have been released from jail.

He also travelled across the province with both the John Horgan and Christy Clark campaigns in 2017. On election night that year, he delivered live reports from the floor of the NDP headquarters in the most nail-biting finish in B.C. political history. The broadcast was also honoured with the RTDNA award for Best Live Special.

Scott was in Seattle to cover the 2016 U.S. election for CTV National News.

Prior to joining CTV News Vancouver, Scott was an anchor/reporter at CTV News Edmonton, where he covered civic and provincial politics extensively.

As an honours graduate of Ryerson University’s School of Journalism in Toronto, Scott’s professional life began as a print journalist at the Toronto Star. Moving on from there, he wrote for the Globe and Mail covering high profile stories like the Toronto 17 terrorism investigation, and the Air France crash at Pearson International Airport.

Born and raised in Dresden, Ont., Scott grew up in a horse racing community and still enjoys watching the sport. He lives with his partner in Vancouver.