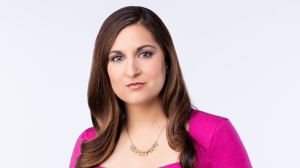 Nafeesa Karim is an award-winning journalist and co-hosts CTV News at Noon and CTV News at Five with Andrew Johnson.

Nafeesa joined the CTV News Vancouver anchoring team in 2018, as host and co-producer of weekend editions of CTV News at Six and CTV News at 11:30.

Nafeesa was part of the team that was awarded the 2021 Webster Award for Best Feature/Enterprise Reporting for Unmarked Graves: Canada's Reckoning.

Nafeesa joined the reporting roster at CTV News Vancouver in April 2012. Whether it’s in the snow or rain, or from high above in CTV’s Chopper 9, Nafeesa has reported live on some of the biggest stories in the city, including the convictions in the Surrey Six murders, the arrests of anti-pipeline protesters on Burnaby Mountain and the massive 2015 Squamish Terminal fire.

Nafeesa studied at UBC and majored in Anthropology and minored in Political Science before deciding to enroll in the BCIT Broadcast Journalism program. While at BCIT, she interned at CityTV, CTV News Vancouver and CKNW NewsTalk 980.