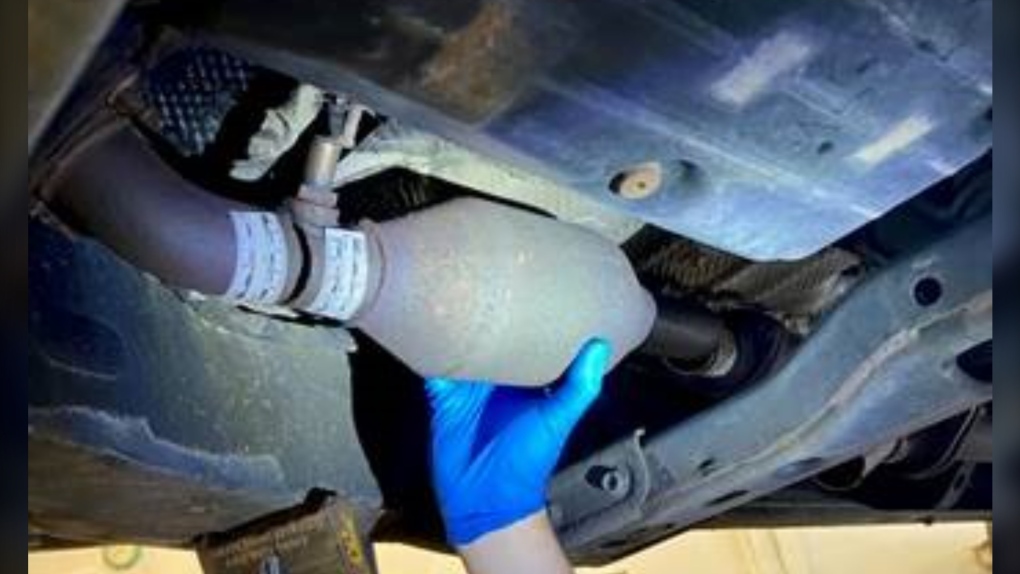 A catalytic converter is seen in this photo provided by North Vancouver RCMP.

Abbotsford police say a 27-year-old Langley man is facing several charges after an incident in which he fled from officers and drove over a spike belt Thursday morning.

The incident began when patrol officers spotted "an occupied stolen vehicle" at the Bradner rest stop shortly after 8 a.m. on Jan. 20, according to a news release from the Abbotsford Police Department.

The officers recognized the stolen vehicle as one that was involved in a previous catalytic converter theft in the city, police said.

"During that incident, the suspect threatened a citizen with a weapon," police said in their release. "The citizen was not hurt."

The suspect attempted to drive away in the stolen vehicle, prompting officers to use a spike belt and attempt to make a traffic stop. The vehicle's tire was damaged, but the driver failed to stop, according to police.

"Given the driver's behaviour, a police pursuit did not occur," police said.

A short time later, the suspect vehicle stopped near the intersection of 216 Street and Highway 1 in Langley, and the driver fled on foot. With the help of a police dog and the Langley RCMP, Abbotsford police found and arrested the driver.

Tyson Fust, of Langley, has now been charged with robbery, flight from police, dangerous operation of a motor vehicle, possession of stolen property, possession of a weapon, breach of release order and obstruction, Abbotsford police said, adding that he remains in custody.

Police said when they searched the vehicle Fust was driving, they found 12 catalytic converters.

"This is an arrest of a prolific offender who has consistently demonstrated no regard for the impact his actions have on other people," Abbotsford police Insp. Casey Vinet said in the release.

"We like to see offenders who pose this kind of risk taken off the streets so the community can receive the protection it deserves."

Canada experiencing shortages of some formulas for babies with food allergies