'A miracle no innocent people were hurt' in high-speed crash in Vancouver, officer says 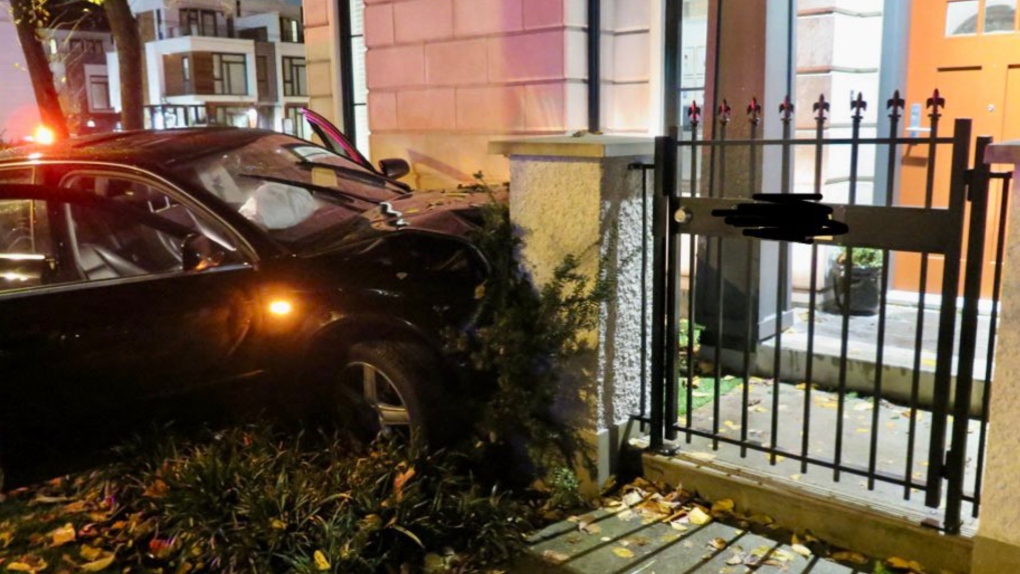 A damaged Audi sedan is shown after a crash in Vancouver in November 2021. (Sgt. Mark Christensen / Vancouver Police Department)

Police say it's a "miracle" a crash in South Vancouver didn't end worse, given the speed of the driver and the proximity of people to the scene.

Sgt. Mark Christensen of the Vancouver Police Department said the crash happened "a couple of weeks ago" by a speed trap set up at Granville Street and 54th Avenue.

He said officers were doing speed enforcement when they clocked the driver of an Audi sedan at 130 km/h in a 50-km/h zone.

The sergeant said officers tried to get the driver in the curb lane to pull over, but that they accelerated. They estimate the driver to have reached a speed of 160 km/h, as they "swerved into oncoming lanes, narrowly missing officers."

Christensen wrote on social media over the weekend that the driver sped south and tried to turn onto 57th Avenue, but didn't make it. The car crashed, and the damage was enough that the driver needed firefighters' help to get out.

Fortunately, their injuries were minor.

The driver, who has not been identified in any way, has since been charged with dangerous driving under the Criminal Code of Canada, Christensen said in a post on Twitter. They've also been given an administrative six-month driving ban.

"It's a miracle no innocent people were hurt!" the sergeant said.

A couple of weeks ago, we were doing speed enforcement on Granville/54th. An Audi, driving in curb lane, was clocked at 130 kmh in 50 zone. As members went to flag car over, it accelerated to estimated 160km, swerved into oncoming lanes, narrowly missing officers! pic.twitter.com/WJc7jZoT02

Canada's vaccine mandate for cross-border truckers is now in effect

A court hearing for tennis star Novak Djokovic's appeal against deportation in Australia ended Sunday and a verdict was expected within hours.

The damage sustained to Vancouver’s scenic seawall during a fierce storm on Jan. 7 could be a sign of things to come as sea levels rise from climate change.

Former federal NDP leader Alexa McDonough, a political trailblazer who paved the way for women in politics, died Saturday in Halifax at the age of 77.

These are the most in-demand skills for Canadian job-seekers

As the job market continues to evolve amid the COVID-19 pandemic, a new report suggests that employers are looking for candidates with skills that weren't as relevant prior to 2020, including virtual customer service experience and skills in safety management.

Get ready to learn more Greek letters. Scientists warn that Omicron's whirlwind advance practically ensures it won't be the last version of the coronavirus to worry the world.

Celine Dion has cancelled the remaining shows in the North American leg of her 'Courage World Tour' as she continues to recover from a recent health issue.

According to a new report, the COVID-19 pandemic has caused meat consumption and demand to decline in Canada.

A tsunami advisory that was issued for parts of the B.C. coast, after an underwater volcano near Tonga erupted on Saturday, has been partially lifted.