A look at Metro Vancouver's latest SeaBus, and more on the Indigenous artwork that covers the ferry 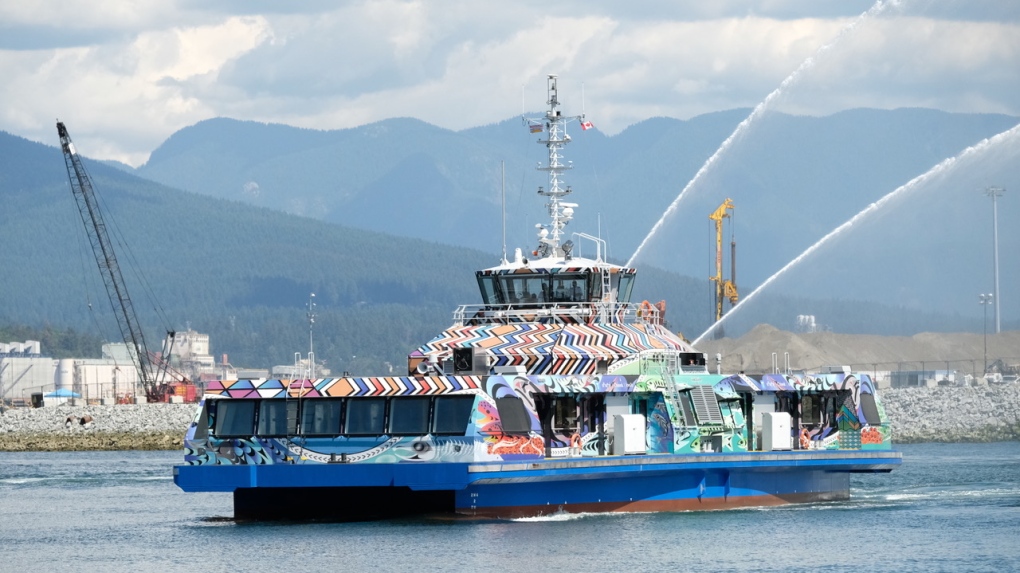 Metro Vancouver's latest public transportation vehicle was unveiled Thursday in a ceremony that included arcs of water shooting over the vessel as it completed its maiden voyage.

The Burrard Chinook, TransLink's new SeaBus, is now in service – one of a fleet of passenger ferries that shuttle commuters across the Burrard Inlet between Vancouver and the North Shore.

While its profile is similar to other vessels that make the crossing, the Chinook has an upgraded look.

The new SeaBus is wrapped in art designed by local Indigenous artists.

According to TransLink, both the Chinook's name and design were meant as a tribute to one of the most iconic species in the waters of the Pacific.

"The chinook salmon has played a central role in life on the West Coast for generations and is a critical part of the ecosystem in the Burrard Inlet and the Pacific Ocean," TransLink said in a statement Thursday.

The artists behind the vessel's unique look are Kelly Cannell, Siobhan Joseph and Angela George. The commissioned artists are from local First Nations – Musqueam, Squamish and Tsleil-Waututh – and worked collaboratively on the piece that wraps the entire SeaBus.

Earlier this year, Cannell said the themes she'd chosen were meant to bring awareness to the fragility of the coastal ecosystem.

"I am showcasing chinook salmon as a link of vital importance to the Pacific Northwest waters. Once abundant but now endangered, resident orcas are dependent on these salmon for their survival. Chinook salmon are also an essential food source for other wildlife throughout the Pacific Northwest Coast and are fundamental to the culture of First Nations peoples. Keeping these waters healthy and thriving is crucial for our territory," she said in a statement issued by TransLink back in June.

She said she included male and female salmon on each side, as in Coast Salish culture, salmon shown in pairs signify good luck, vitality and wealth.

Young smolt can be seen swimming the currents depicted on the ferry, and chinook tails can be seen beneath the waves.

"My imagery is purposely symmetrical to symbolize the sacred balance we need to sustain these waters," she told TransLink in her proposal for the project.

Joseph's vision, according to TransLink, came from the shape of the ferry itself. She said the passenger cabin could be seen as a longhouse, and the bridge has a resemblance to a canoe.

From this, she proposed a school of salmon on the lower part, with orcas and sea lions higher up.

"I also thought of a canoe design because the SeaBus is like a canoe that travels across the inlet with Indigenous people in the canoe," she said of her proposal.

And George had planned to include the backbone of the salmon, which returns "to our lands and waters to provide nourishment and enrichment in life and in death.

"This reciprocal relationship ensures that all living beings and our lands and waters continue to thrive and are sustained for all times."

Additionally, she envisioned other imagery that would tie back to the Indigenous history of the area.

"This design represents the double-headed serpent that dwelled in the Burrard Inlet, bringing great strength and resiliency to the people. The Chinook vessel has two engines and possesses great strength like the ancient serpent from these waters. The design also represents the ripple effect of everything we do and say echoing out into the universe."

Her proposal included mountain trails meant to suggest the knowledge and ancient wisdom of the spiritual people and hunters who travelled along those paths.