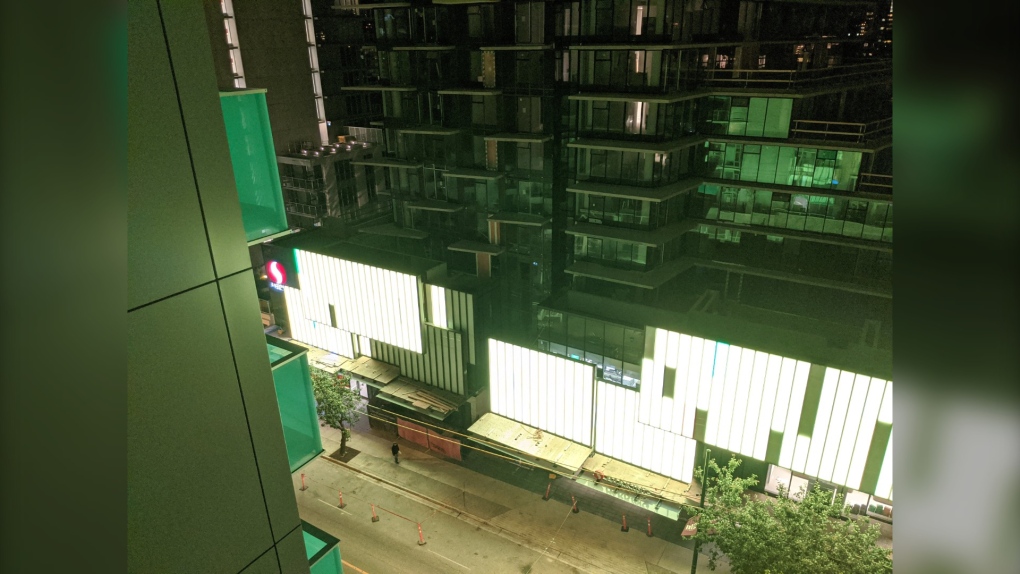 West End residents have taken to social media to complain about light pollution from the recently reopened store at 1641 Davie St. (Twitter/@ThatManJim)

VANCOUVER -- The City of Vancouver says it has received three complaints, so far, about the massive lights installed on the facade of the new Safeway store on Davie Street, and is "looking into" them.

West End residents have taken to social media to complain about light pollution from the recently reopened store at 1641 Davie St.

Photos posted on Twitter and Reddit show light from the grocery store emanating up the sides of nearby highrises.

Twitter user James Sweatman described the sight, in a tweet, as lighting up the neighbourhood with "a horrific light wall," and said it made sleeping impossible in his apartment across the street.

We're at 1668 Davie St, directly opposite. No warning, no comment from @SafewayCanada or the building company.

We're on the 10th floor, I can't imagine how bad it is lower down.

I can't fathom how this was approved by the city pic.twitter.com/4s7HoqblFU

"I can't fathom how this was approved by the city," Sweatman added.

CTV News Vancouver asked the city whether the lighting violates bylaws or zoning rules, but did not receive a response to that question.

The city did say it had received three complaints about the lighting and was looking into them.

CTV News has also reached out to Safeway Canada and developer Crombie REIT for more information about the lights.

Construction began at the site in September 2017. According to Crombie's website, the new development includes a larger Safeway than the one it replaced, as well as 9,000 square feet of additional retail space.

The project was built in collaboration with Vancouver-based developer Westbank and includes two residential towers totalling 253,000 square feet of living space, much of which can be seen illuminated by the Safeway lights in photos from the area.

In an email to CTV News Friday, a spokesperson for Westbank Corp. said the light feature is a "prelude to a work of art that will speak to the surrounding community."

"We understand that this was disruptive to the residents in the community, and we apologize to those who were impacted."

Westbank said the feature was left on overnight Wednesday due to an error in programming.

The corporation says the lights are supposed to be at a "reasonable ambient level that is complementary to the surroundings and not invasive."

It said panels should be lit during the day and early evening, but not left on overnight, and precautions were taken following the error earlier this week.