VANCOUVER -- There’s a very happy Father’s Day ahead for the new parents of a baby boy who ended up needing some high-level care at a Vancouver hospital.

Their journey to becoming a family of three required an actual journey, all the way from Yukon to the neonatal intensive care unit at St.Paul’s Hospital.

In mid-April, Greg Shaw and his husband Allen Penny got an unexpected call from their friend, who was the surrogate carrying their child.

She told them she needed to go to the hospital. At that point, the pregnancy was just shy of 33 weeks along.

“When we arrived at the hospital, they did confirm that her water did break,” Penny said, and added they were told she would have to be flown by air ambulance to Vancouver, as the Whitehorse hospital was not equipped to care for babies potentially born that early.

Shaw said they were told to prepare to be in Vancouver for up to two months.

“It all happened really quickly,” he said. “I wouldn’t say it was overwhelming, but certainly stressful at the time.”

Shaw said some of the stress also came from the fact COVID-19 cases were much higher in Metro Vancouver at that time in the pandemic.

A few days after arriving in Vancouver, the couple was told their baby would have to be delivered right away, due to worries about his growth in utero.

“When they did an ultrasound and compared it to the last one we did here in Whitehorse, they were concerned about his lack of growth in that three week period,” Shaw said.

Penny said they were prepared for the worst.

“So when it actually happened, and he was healthy, screaming, everything was going right, it was a big sigh of relief,” he said.

Their son, Yukon Shaw-Penny, was born April 20, and spent the next two and a half weeks in the hospital’s neonatal intensive care unit.

“The nurses were amazing,” Penny recalled, and added the staff helped them learn everything from changing a diaper to feeding and bathing a pre-term baby. “I remember my first experience with changing a diaper with all the cords. It was a hot mess, but they were so supportive.”

Shaw said due to the pandemic, they hadn’t had the chance to take hands-on prenatal classes before Yukon’s early arrival.

“The skill and knowledge that the nurses in the NICU gave us, and just their compassion and their caring, was outstanding,” he said. “They really set us up for success during our stay and when we left to go home as well.”

Clinical nurse leader Teaghan Evans said Shaw and Penny spent as much time with their baby in the NICU as they could.

“If they could have spent 24-7 with him, they would have,” she said. “It was so clear going home how bonded they were. It was so, so beautiful.” 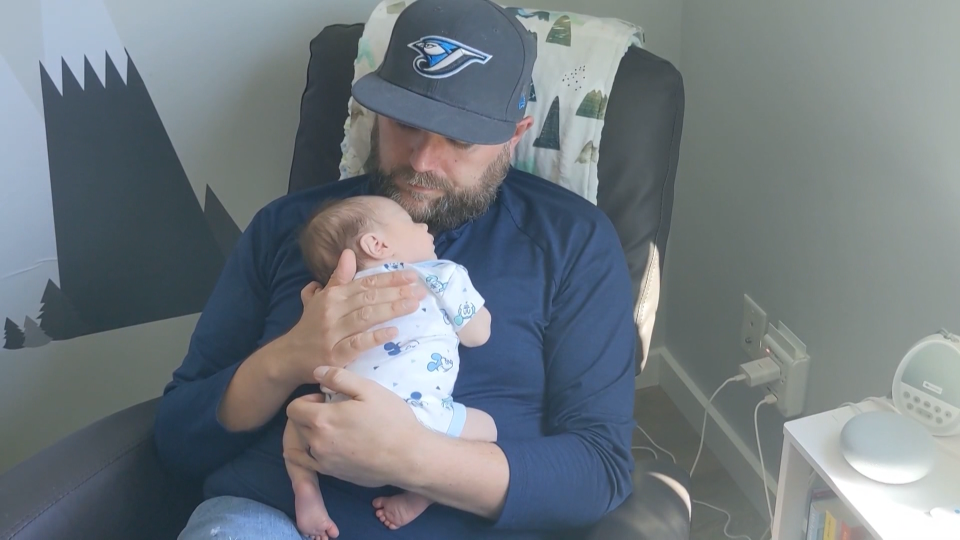 Evans remembered one of the first times she met the couple, they were playing pop music for Yukon.

Shaw said playfully they were hoping to influence their son’s musical tastes early, and also get him used to the music he would hear at home.

“He’s our little miracle baby,” he said. “So every minute we could spend with him...it was just an amazing experience.”

“I couldn’t even look at anybody without crying,” he said. “And it wasn’t the fear of taking him home, it was, how do you say goodbye to these people that provided such amazing care to your child?”

Penny said if they had to do it all over again, they wouldn’t change a thing.

“They were an absolute blessing,” he said.

Penny and Shaw have been home with their little boy for just over a month now, and have been settling in to a routine together. Yukon, who weighed three pounds and 12 ounces at birth, is now over seven pounds.

“The struggle with sleep is real, for sure,” laughed Penny. “Aside from that, it’s beautiful.”

The family plans to celebrate their first Father’s Day with a camping trip together, to explore more of the beauty of the place that inspired their son’s name.

Shaw said before he and Penny moved to the territory from New Brunswick a few years ago, they came to visit the Whitehorse area.

“We were driving down a road, and I remember looking at Allen and I just said, ‘This is the place where we start our family’,” he recalled.