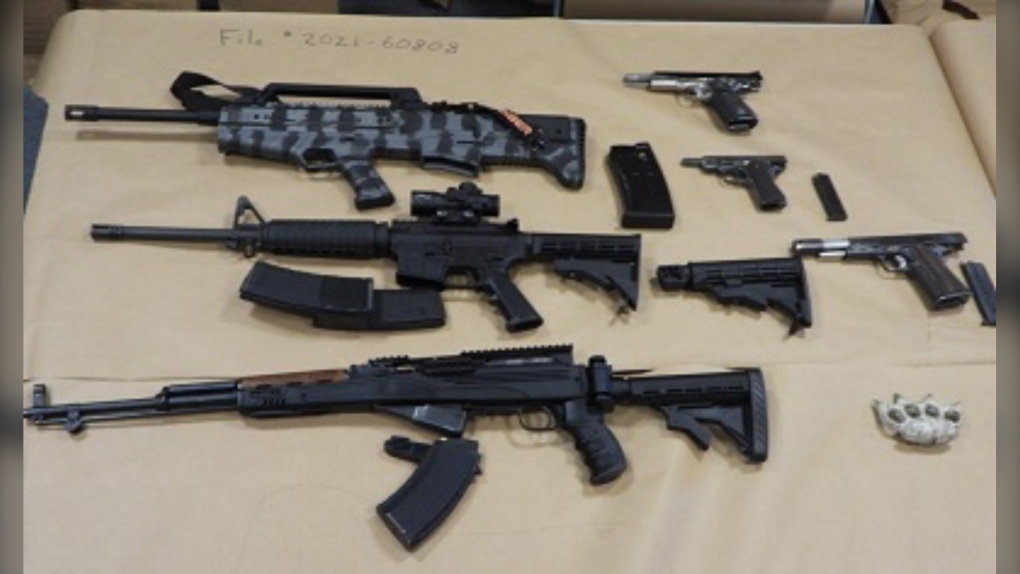 A picture of the loaded guns allegedly found in a South Surrey home by the Surrey RCMP drug unit on May 19, 2021 (Surrey RCMP)

VANCOUVER -- The Surrey RCMP Drug Unit say they have executed a search warrant on a South Surrey home and seized six loaded guns, cash and a large quantity of fentanyl.

The alleged seizure is part of an investigation into guns and drug dealing in Whalley started in April by the drug unit, says a news release put out Wednesday by Surrey RCMP.

During that probe, police say they became aware of a home in South Surrey that might be connected to their investigation. On May 19, police went to the home near 28 Avenue and 162 Street and four people were taken into custody, says the release.

More than $16,000 in cash, 223 grams of fentanyl, a 20-gauge semi-automatic shotgun with loaded double magazine, two loaded assault rifles and three pistols, one of them loaded, was also allegedly found in the home.

“Surrey RCMP is strategically targeting the people who put our community at risk by engaging in the drug trade the violence that accompanies it,” said Cpl. Vanessa Munn in the news release.

All four people in the home have since been released. Police say their investigation is ongoing.