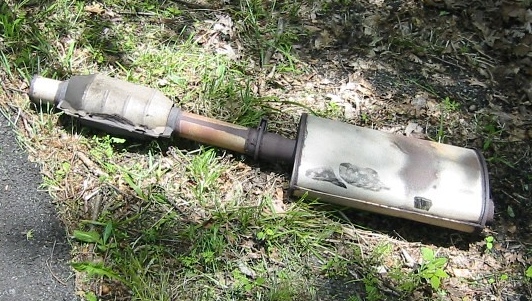 A muffler and catalytic converter are seen here in a stock photo. (flickr/noricum)

VANCOUVER -- Police in Delta say there has been another rise in the number of catalytic converter thefts occurring across the city, highlighted by seven thefts in a single day this week.

The converters, which are part of the exhaust system on gas-powered vehicles, reduce the amount of toxic gases that a vehicle emits into the air.

On Thursday, June 17, police were called to seven different reported catalytic converter thefts around the city. Details of the individual incidents were as follows.

Those incidents followed one on Friday, June 11, in a parking lot at Tsawwassen Mills shopping centre, according to Delta police.

In that incident, a truck owner reported to police that he had seen a man holding a battery-operated "sawzall" standing next to his vehicle.

“Not surprisingly, the vehicle owner thought the man with the saw looked suspicious,” said Delta police spokesperson Cris Leykauf, in the release.

“The man realized he was being watched and went under the truck, apparently then slicing the bottom corner of the fuel tank, causing a fuel leak," Leykauf added.

Police officers, firefighters and the truck owner captured approximately half of the fuel in large evidence bags, police said, adding that the suspect fled the scene in another vehicle.

Delta police say the theft of catalytic converters is "an ongoing issue across the region." Thieves steal the device, because the salvage price of the metal inside it is high.

"In some cases police are aware that individuals are also purchasing these sliced off catalytic converters, potentially for resale," Delta police said in their release.

According to police, vehicle owners can guard against catalytic converter theft by parking inside a garage or in a well-lit area, parking in a secured lot with a guard and in view of security cameras, and by reporting any suspicious activity they see.

"Police also continue to recommend that commercial fleet operators and owners of RVs and large trucks have their catalytic converters etched with the vehicle licence plate," police said in their release.

They're also encouraging people to consider having the catalytic converters on their personal vehicles etched.