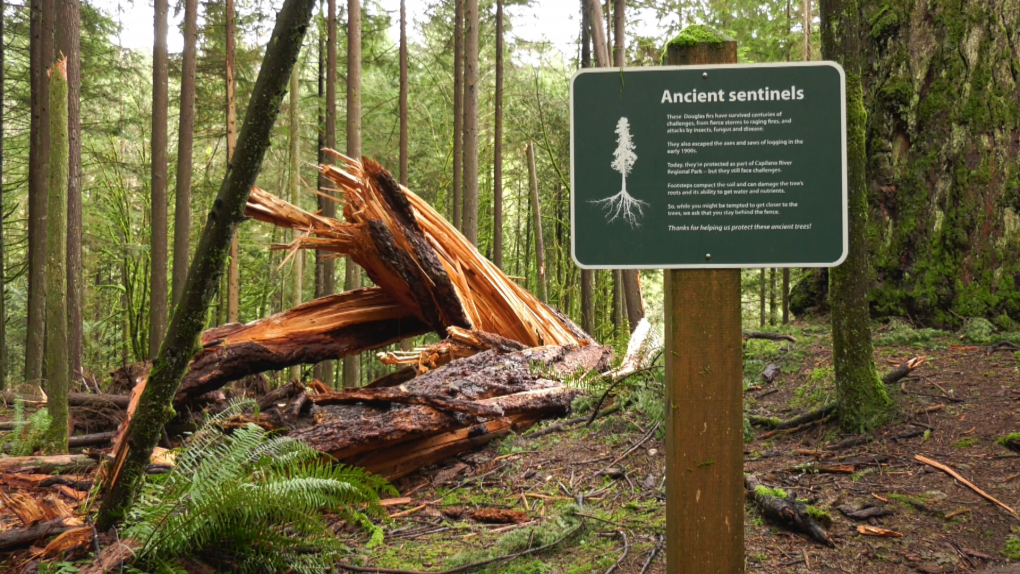 A felled tree is seen in Capilano River Regional Park in North Vancouver on Tuesday, Jan. 26, 2021.

VANCOUVER -- A giant has fallen in North Vancouver.

Capilano River Regional Park has said goodbye to one of its last standing sentinel trees.

The Douglas fir tree, estimated to be around 500 years old, two metres in diameter, and 58 metres tall, fell on Dec. 8, 2020 due to natural causes.

“It was felled by laminated root rot, a natural process that affects many Douglas fir trees as well as other conifers,” said a Metro Vancouver Regional Parks spokesperson.

Laminated root rot is caused by a fungal pathogen, Phellinus weirii, which spreads when healthy roots of a tree come into contact with diseased roots. It's one of the most damaging root diseases in British Columbia for Douglas fir and grand fir trees, according to the province's Field Guide to Forest Damage in B.C. report.

“The disease causes root decay, which can lead to significant growth reduction, and makes trees susceptible to toppling,” the report states.

The huge tree was a familiar sight to park visitors on the Giant Fir Trail and survived its fair share of battles over the hundreds of years it stood tall watching over the forest.

“This tree survived centuries of challenges, from fierce storms to raging fires, attacks by insects, fungus and disease,” said the spokesperson.

“It also escaped the axes and saws of logging in the early 1900s.”

Fortunately, there are other surviving giant Douglas fir trees in the park.

“The good news is that the tree has a sister just a few metres away - even larger - that lives on,” said the spokesperson. The well-known Grandfather Capilano is also nearby, estimated to be more than 800 years old.

The fallen tree will now remain in the forest - with a new purpose.

“The fallen tree will be left in place and has already begun the process of giving back to the forest ecosystem,” said the spokesperson. “Insects will break down the wood. Birds, squirrels, and other creatures will make their home in the hollowed-out spaces and feed on the insects.”

“Bit by bit, the nutrients contained in the fallen tree will be released back into the forest floor and will be used by surrounding trees to grow bigger and taller.”