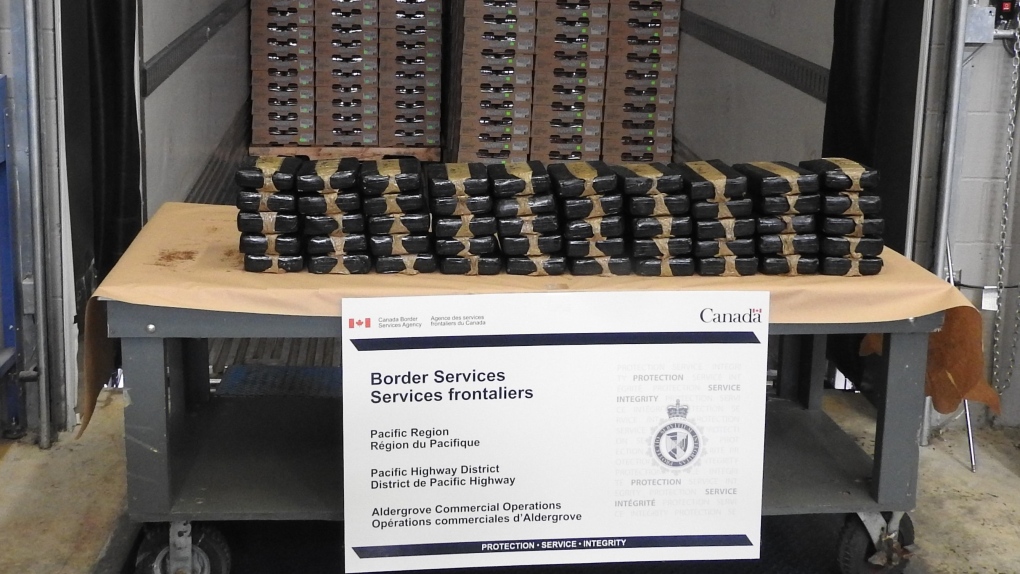 Suspected cocaine and heroin seized at a B.C. border crossing are shown in a photo from CBSA.

Someone tried to smuggle more than 50 kilograms of illicit drugs across the U.S.-Canada border, officials say.

The attempt happened a month ago, but the Canada Border Services Agency did not make it public until Monday.

In a news release, CBSA said a truck driver was stopped at the Aldergrove crossing in Langley. Officials did not say why agents were suspicious, but said that the truck was flagged for a secondary examination after the driver was questioned.

Officers looking at the truck's cargo noticed some of the pallets had been "tampered with," CBSA said.

CBSA said more than 50 kilograms of a substance suspected to be cocaine were seized from the truck, as was another one kilogram of suspected heroin.

The drugs and suspect were transferred to the RCMP's Federal Serious and Organized Crime team for further investigation.

Police have not provided any information on the suspect or what they may be charged with, saying only that the investigation is ongoing.

What is a 'zombie fire?' Experts explain the cause and concerns

The white father and son convicted of murder in Ahmaud Arbery's fatal shooting after they chased him through a Georgia neighbourhood were sentenced Monday to life in prison for committing a federal hate crime.