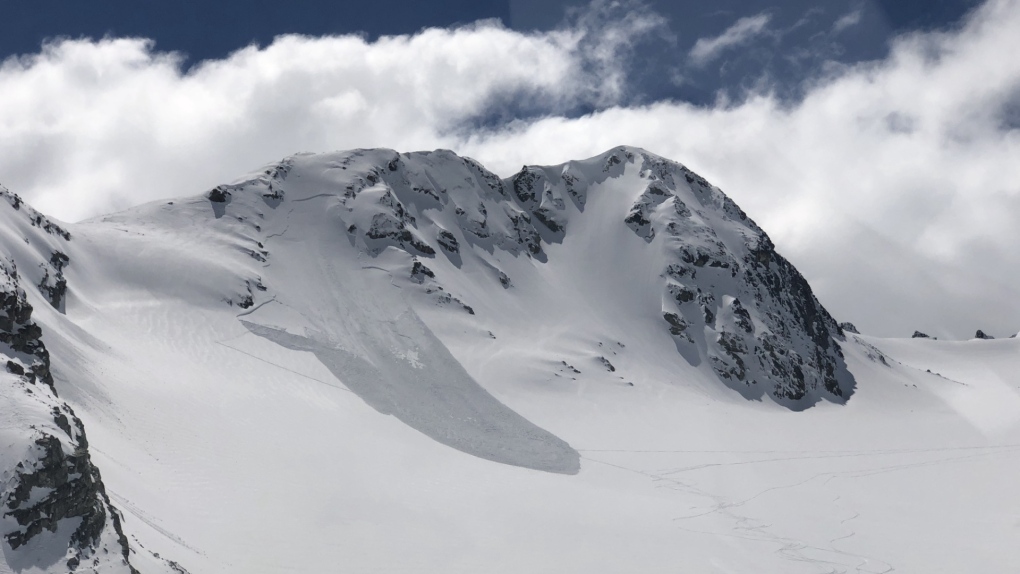 An avalanche on Mount Pattison in the backcountry near Whistler is seen on May 20, 2022. (Whistler Search and Rescue)

Whistler Search and Rescue is warning backcountry users of elevated avalanche risk this long weekend, after five skiers were fortunate to avoid injury in a significant slide Thursday night.

According to a summary the search and rescue team shared on Avalanche Canada's Mountain Information Network Friday, a group of five ski tourers were heading out to complete the Spearhead Traverse when they accidentally triggered the avalanche around 7 p.m. while ascending the west face of Mount Pattison.

"All five group members were caught in the avalanche and were partially buried," the summary reads. "Four were able to self-extricate and one needed to be excavated out (buried up to their neck) … Miraculously no injuries and only one ski pole lost."

The team described the avalanche as a "Size 2 slab avalanche," and said crews observed several other natural slides while flying to the avalanche site.

Avalanche sizes are typically measured on a five-point scale, with Size 2 on the smaller end, but still containing enough material to bury a person.

"Please use caution this weekend as avalanche hazard is expected to remain elevated and far from typical for this time of year," Whistler Search and Rescue warned.

However, the agency's "spring conditions guide" warns that danger can vary from low to high throughout the day.

"In general, reduce your exposure to avalanche terrain during periods of solar radiation, daytime warming, or rain," Avalanche Canada warns.

They are the most fiercely polarizing issues in American life: abortion and guns. And two momentous decisions by the Supreme Court in two days have done anything but resolve them, firing up debate about whether the court's Conservative justices are being faithful and consistent to history and the Constitution – or citing them to justify political preferences.

Man arrested after four people violently attacked by his dog in Toronto: police

A suspect has been arrested after he and his 100-pound dog allegedly attacked four people overnight, Toronto police say.