46 Vancouver businesses have applied for temporary patios in 4 days 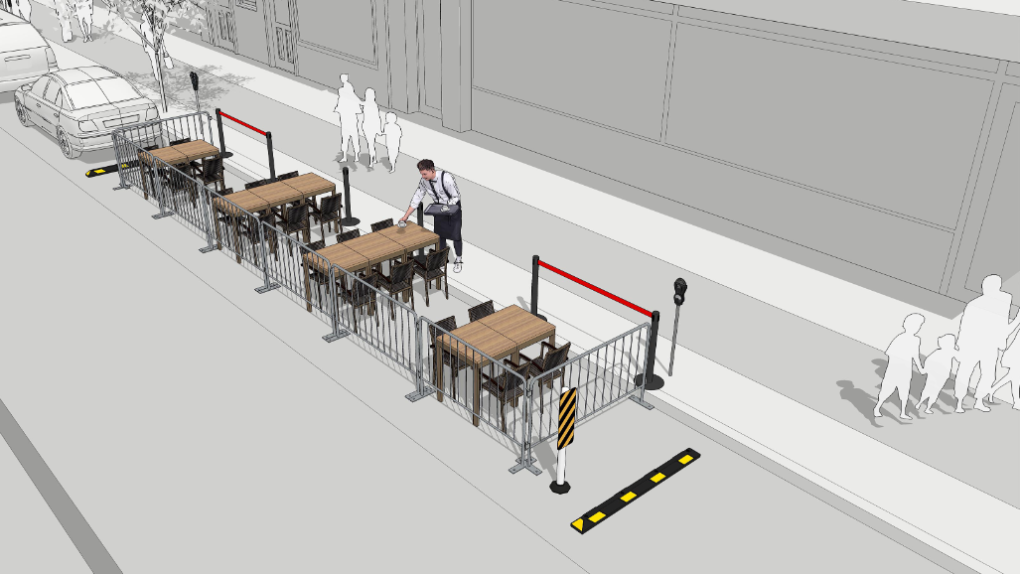 A drawing of a curbside patio provided by the City of Vancouver.

VANCOUVER -- The City of Vancouver says it has received nearly four dozen applications from restaurants seeking to open temporary patios this summer since launching its online application form on Monday.

The city has already issued 14 temporary expedited patio permits, according to a news release issued Thursday. There have been 46 applications so far, the city said.

Restaurants and liquor-serving establishments can apply online to expand their seating onto the sidewalk, street or parking lot in order to create more room for patrons to maintain the physical distance necessary to stop the spread of COVID-19.

The city also announced Thursday that it is expanding its program to include breweries with manufacturing licences.

Applicants that meet the mandatory requirements for patios can expect to receive their permits within two business days of submitting their applications, the city said.

Those requirements include measurements and photos of the proposed patio area, with information on how close the suggested space is to utility access points, fire hydrants, fire department connections, parking meters, street signs and street lights.

Three of the 46 applications submitted so far have been for patios on private property, and the city said staff members are working with those applicants on "interim options."

There is no application or permit fee for businesses seeking to open a temporary patio between now and Oct. 31, but businesses intending to serve alcohol on their patios must also meet provincial liquor licensing requirements and obtain provincial approval for a temporary service area expansion, the city said.