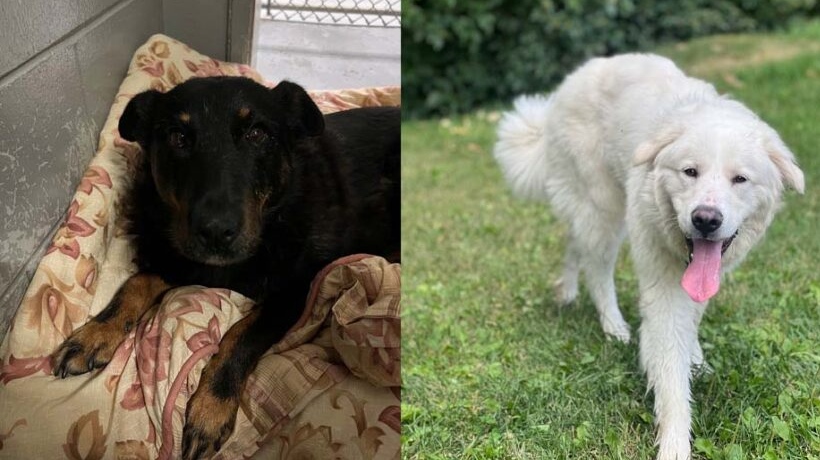 The B.C. SPCA says four dogs, including these two, are missing from the Prince George branch after a break-in. (SPCA)

A B.C. SPCA branch is looking for four missing dogs after a break-in at the local shelter.

The Prince George SPCA said several dogs were let loose overnight. When staff arrived Friday morning, they discovered someone let out all the dogs in one area of the building.

"Two dogs have been found, one remained at our location and four are still missing," said Jamey Blair, SPCA's senior manager for the North Cariboo region, in a news release.

Two other dogs were in a different part of the shelter and weren't released.

Two of the released dogs were at the shelter as part of the SPCA animal control agreement with the city.

"We suspect that the break-in was related to these two dogs, but this has not been confirmed," Blair said.

The other two missing dogs – a Rottweiler mix and a great Pyrenees mix – were in the SPCA's care. Anyone who sees the missing dogs is asked to call Prince George SPCA at 250-562-5511.

"We want to get them safely back to the shelter as soon as possible," Blair said.

CTV News Vancouver has reached out to the RCMP for details on the break-in.

Fishers and property owners in Newfoundland and Labrador are awaiting word about possible government assistance and are left wondering whether it will be enough to fill the gaps.

opinion | Naheed Nenshi: In Canada, there is little to no anti-immigrant rhetoric

Fifty years ago, there was a moment that changed the fabric of this country forever, Naheed Nenshi writes in an exclusive column for CTVNews.ca. For arguably the first time, Canada extended its hand to refugees who looked different, who worshipped differently than most Canadians, but who needed help, the former Calgary mayor says.