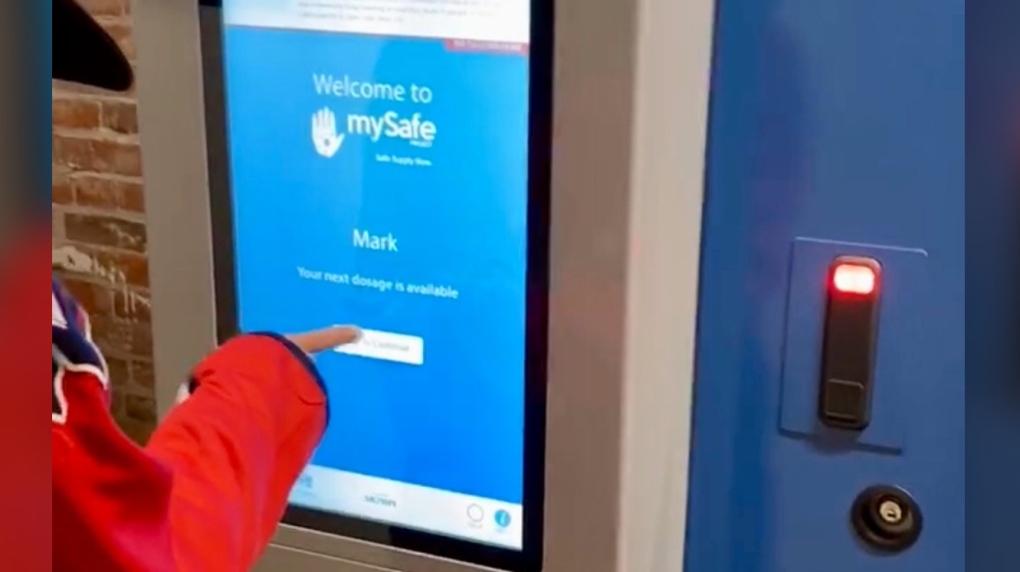 VANCOUVER -- The federal government has provided nearly $3.5 million in funding for vending machines that will dispense a medical-grade opioid to drug users in four cities in an effort to prevent overdose deaths.

Darren Fisher, parliamentary secretary to Health Minister Patty Hajdu, said two machines are located in Vancouver and one each are in Victoria; London, Ont.; and Dartmouth, N.S.

The machines, called MySafe, are similar to ATMs and allow drug users to get hydromorphone pills, a substitute for heroin, dispensed to them after their palm has been scanned to identify them.

“Safer-supply projects offer people with opioid use disorder a life-saving alternative to the toxic, illegal drug supply, but they are not always convenient and easy to access,” Fisher said.

He said MySafe allows participants to access a safer drug without fear, shame and stigma, and without contact with anyone, which is all the more essential during the pandemic.

Participants in the MySafe program in Vancouver are assessed by a doctor and a baseline urine sample is collected before they can access hydromorphone through the machines, which are bolted to the floor.

Dr. Mark Tyndall, an epidemiologist and infectious disease specialist, began the MySafe project in December 2017, with the installation of the first machine next to an overdose prevention site in Vancouver's Downtown Eastside.

The area is home to North America's first supervised injection site as well as Crosstown, the continent's first facility to provide injectable heroin as a therapy for entrenched drug users who have tried multiple methods to quit their habit.

While Crosstown also provides injectable hydromorphone, Tyndall said the program's strict regimen requiring users to attend several times a day and use their drugs under supervision is not ideal for people who fear being stigmatized.

The MySafe program, which now has 20 participants at the initial Vancouver site, allows users to access hydromorphone tablets at their convenience, he said.

“In a very short time, I've seen people's lives change. The ability to get up in the morning and just go and pick up your medications is just revolutionary to many people who have, in many cases, got up in the morning, felt unwell and had to hustle to find their drugs,” said Tyndall, a former director of the B.C. Centre for Disease Control.

However, he said it's been “an uphill battle” trying to persuade “skittish” doctors in the Downtown Eastside to prescribe hydromorphone that would be dispensed through a machine instead of by a pharmacy.

“The two machines in Vancouver are going to still be a challenge,” he said of reluctance by prescribers in the city where Mayor Kennedy Stewart has implored the federal government to decriminalize the possession of small amounts of drugs for personal use due to the high number of overdose deaths.

Tyndall said that at 32 cents for an eight-milligram tablet of hydromorphone, MySafe is a cheap and scalable option for communities after an estimated 20,000 overdose fatalities across Canada in recent years.

Jen Baker, chair of the Ontario Pharmacists Association, said the province already has remote dispensing locations at pharmacy kiosks, and a system like MySafe could be incorporated to provide hydromorphone for those at risk of overdose.

“I could see how those sorts of locations could be adapted in this harm-reduction model to contain medications for those individuals,” she said.