The number of people with COVID-19 in B.C. hospitals remained at 273 on Thursday, still slightly above the lowest total seen in 2022 so far.

The number of coronavirus-positive patients requiring critical care ticked up slightly, from 28 last week to 32 this week. 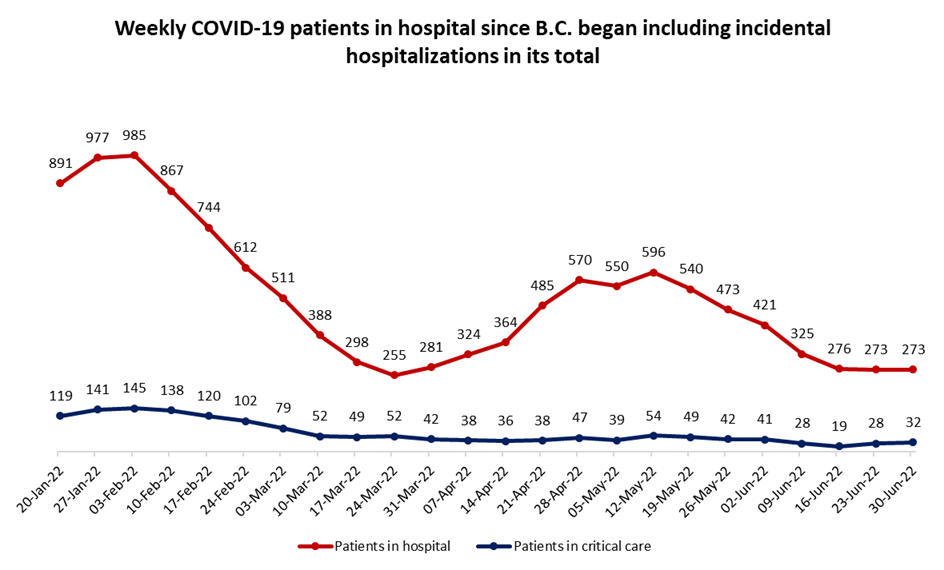 This graph shows the number of COVID-19-positive patients in B.C. hospitals on Thursdays since the province switched to a "hospital census" model in January. (CTV)

The number of patients in hospital each week is reported using a "hospital census" model, which includes anyone who has tested positive for COVID-19, regardless of whether the disease is the reason for their hospitalization.

Since the province switched to this method of counting hospitalizations in January, the total reported on Thursdays has been as low as 255 and as high as 985.

In addition to the data on people currently in hospital, the B.C. Centre for Disease Control also released its weekly figures on new cases, new hospitalizations and new deaths Thursday.

The data shows 620 new cases confirmed during the week of June 19 to 25, a slight decrease from the 642 recorded during the previous epidemiological week.

It should be noted that these numbers do not reflect all transmission of COVID-19 in B.C. Rather, the BCCDC releases only results confirmed through lab-based testing, which is available to only a small subset of B.C. residents with symptoms of the disease.

Results from at-home rapid antigen tests are neither collected nor reported, meaning the true scope of coronavirus spread in B.C. at any given time cannot be known.

Still, 620 new lab-confirmed cases is the lowest total the province has reported since it switched to weekly updates in early April, and other indicators – such as wastewater surveillance – also trended downward throughout May and June.

The BCCDC's latest situation report indicates some wastewater treatment plants in the Lower Mainland have been seeing an increase in viral loads in recent weeks, though concentrations of the coronavirus remain on the lower end relative to where they were earlier in the year.

During the week of June 19 to 25, there were 169 new hospital admissions and 17 deaths of COVID-positive people.

Both of those totals are expected to increase "as data become more complete," according to the BCCDC.

Last week – for the period of June 12 to 18 – the BCCDC reported 156 new hospitalizations and 26 new deaths. Those figures have been revised upwards this week to 194 and 32, respectively.

Not all of the deaths reported in a given week are actually caused by COVID-19. Since April 2, the province has reported "30-day, all-cause mortality," meaning anyone who dies within 30 days of a positive COVID-19 test is included in the total.

The province's Vital Statistics agency then works to determine the underlying cause of death, a process that can take eight weeks.

As of June 18, the most recent date for which data is available, 726 deaths had been reported under the new system. Of those, the underlying cause was still pending for 172.

Most of the rest were not caused by COVID-19, according to Vital Statistics. A total of 310 of the remaining 554 deaths (about 56 per cent) had some other underlying cause, while 244 (44 per cent) were caused by COVID.

If the same ratio holds for the deaths reported for June 19 to 25 so far, then seven of the reported 17 will be found to have COVID-19 as their underlying cause.

Earlier this week, the National Advisory Committee on Immunization announced its recommendation that all Canadians be offered a seasonal COVID-19 booster shot this fall, ahead of a possible surge in transmission.

NACI's recommendation places particular emphasis on boosters for those at greater risk of severe illness from COVID-19, specifically those ages 65 and older, those with underlying medical conditions, and those in congregate living situations.

Though they're most important for these groups, booster doses should be offered to all Canadians ages 12 and older, regardless of how many doses they've already had or how many times they've had COVID, according to NACI.

In B.C., a total of 48,778 doses of vaccine were administered during the week of June 19 to 25. The vast majority of those – 39,831, or about 82 per cent – were fourth doses for people in the aforementioned vulnerable groups.

As of June 26, 43 per cent of those ages 70 and older had received four doses of a COVID-19 vaccine, according to the BCCDC's COVID-19 Surveillance Dashboard.

A fragile ceasefire deal to end nearly three days of fighting between Israel and Palestinian militants in Gaza held into Monday morning -- a sign the latest round of violence may have abated.