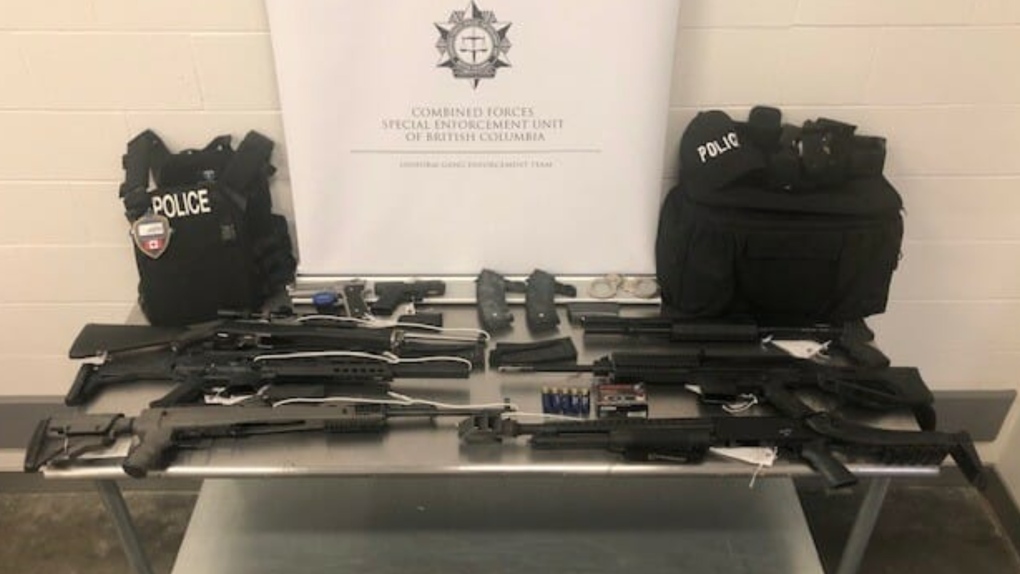 Two men charged in a 2020 "straw purchaser" investigation have been sentenced, according to B.C.'s anti-gang police unit.

The Combined Forces Special Enforcement Unit of British Columbia says 31-year-old Alex Lytle, of Port Coquitlam, has been sentenced to eight months in jail after pleading guilty to possession of firearms, prohibited devices and ammunition while prohibited.

Pitt Meadows resident Harjot Chahal, 26, was found guilty of transferring firearms without authority and received a conditional sentence of 21 months, according to a news release from the CFSEU-BC.

Both men were arrested in September 2020 as part of a CFSEU-BC investigation into a "straw purchaser" – someone who legally purchases firearms on behalf of someone else who does not possess a firearms licence.

The investigation began in "mid-2020," according to the CFSEU-BC. Investigators learned that two men had made a suspicious purchase at a firearms dealer in the Lower Mainland.

"One of the men, who did not have a valid license to purchase firearms and was prohibited from possessing firearms, appeared to be directing the other male to buy a firearm and ammunition," police said in their release.

"The purchaser had also bought several other firearms in the past year."

The investigation also led to the seizure of three additional handguns and two long guns.

"Straw purchasing undermines the integrity of the legal sale and possession of firearms, putting them in the hands of individuals who intend to use them for a criminal purpose, jeopardizing the safety of our public," said Insp. Joel Hussey, investigations officer for the CFSEU-BC, in the release.

"The CFSEU-BC Crime Guns Intelligence and Investigations Group (CGIIG) works closely with our policing and government partners to aggressively pursue straw purchasers, holding them and the criminals they are linked to accountable."

As NATO prepares to embark on the greatest overhaul of the alliance’s deterrence capabilities since the Cold War at a leaders’ summit in Spain, Canada’s role in the new defence strategy remains uncertain.

Most domestic flights in Canada getting cancelled, delayed: data firm

More than half of all domestic flights from some of Canada's major airports are being cancelled or delayed, recent data has shown.

Canada Day celebrations are making a return after two years of scaled-down festivities because of the COVID-19 pandemic, but some Canadians hoping to catch a traditional parade may be out of luck.

An RCMP officer who was among 22 people killed in the 2020 Nova Scotia mass shooting is being remembered today during a regimental memorial service in Halifax.

Tensions were high Wednesday in the western Indian city of Udaipur, a day after police arrested two Muslim men accused of slitting a Hindu tailor's throat and posting a video of it on social media, in a brutal attack representing a dramatic escalation of communal violence in a country riven by deep religious polarization.