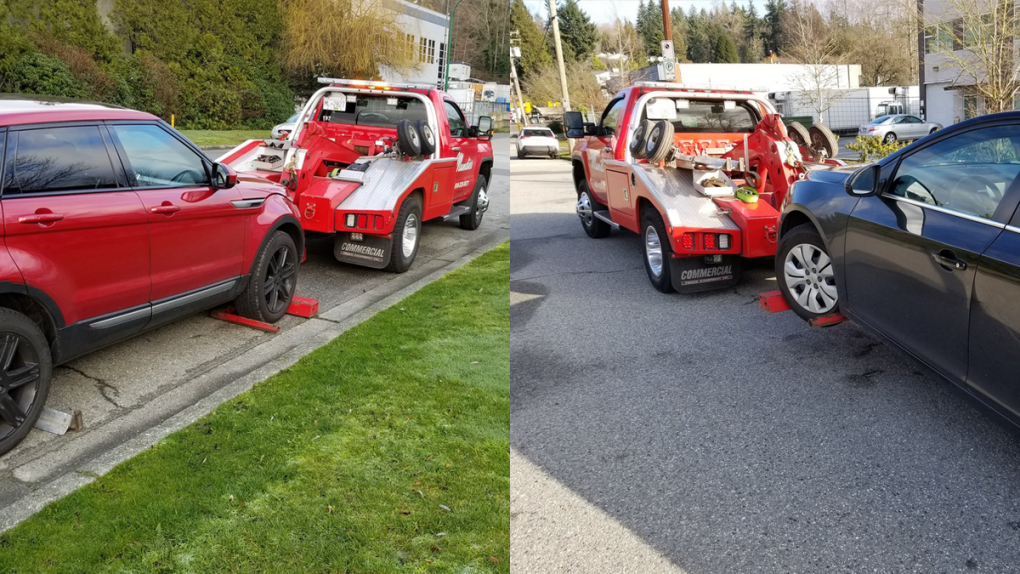 Two vehicles are shown in photos from the Burnaby RCMP.

VANCOUVER -- Mounties are using two incidents in one area as a reminder to the public to slow down.

According to officers, each driver was travelling at a speed more than double the legal limit.

The RCMP said they were caught in a 50 km/h zone in Burnaby doing more than 100 km/h.

Both were in the area of Marine Way and Boundary Road, the RCMP said.

Each driver was handed a ticket, and both vehicles were impounded.

The RCMP shared photos of the vehicles being towed away with the hashtag "#slowdown."

Early this morning one of our Traffic Enforcement officers was in the area of Marine Way/ Boundary Rd in @CityofBurnaby catching two drivers ⬇️ doing more than 100 km/hr in the 50 km/hr zone both recieved VT's and their vehicles were impounded #SlowDown #RoadSafety pic.twitter.com/jYZwmu5aQJ

A short time after posting about the speeding tickets, the detachment's traffic enforcement officers also ticketed a truck driver.

In that case, they say, the truck had "bald and bulging tires," and was carrying "insecure goods and insecure cargo."

The truck was taken off the road, and the driver was fined for the incident.

One of our Traffic Enforcement Officers just caught this truck on @CityofBurnaby roadways with bald and bulging tires, insecure dangerous goods and insecure cargo. The driver recieved a VT and the truck was removed from the roadway #CMVSafety pic.twitter.com/ju9GidDUxT