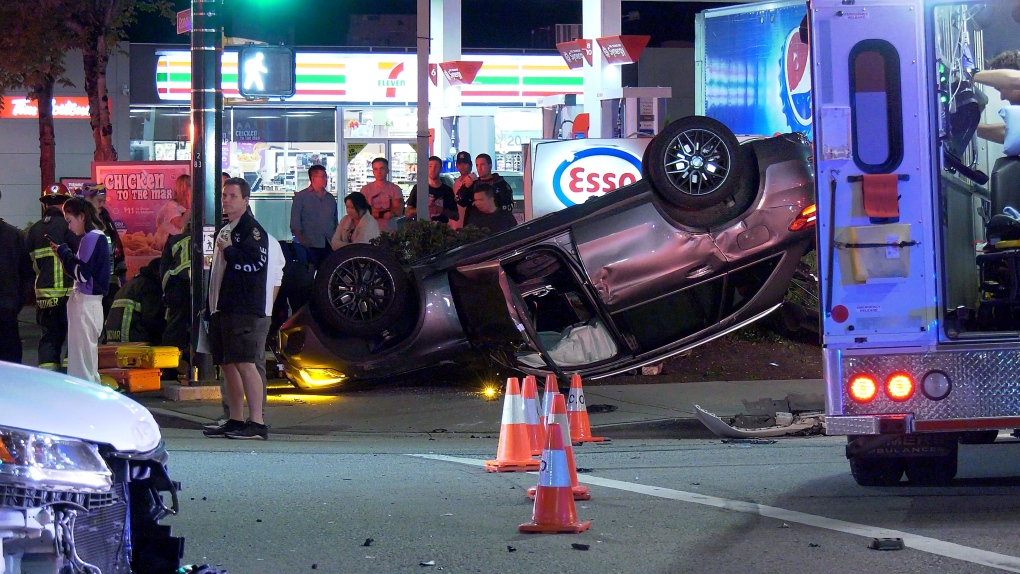 An SUV rolled over and a collided with an Esso sign in Vancouver Monday night.

At least one person has been taken to hospital after a two-car crash sent an SUV rolling into an Esso gas sign in Vancouver Monday night.

The crash happened at Rupert Street and Grandview Highway at 9:30 p.m. between a Mercedes Benz SUV and a Honda sedan. At least one person was treated by first responders on scene and was taken away in an awaiting ambulance.

Rupert Street and Grandview Highway eastbound were closed as Vancouver police collision investigators were on scene for a few hours taking photographs and measurements at the crash scene.

It is unknown how many people were taken to hospital as a result of this crash. It is also unknown how the collision happened. Vancouver police haven’t commented on this incident.

The cars have since been towed away and the streets have been re-opened.

At least one person has been taken to hospital after a collision on Grandview Hwy and Rupert St Monday night. An SUV rolled over into an Esso gas station sign. @VancouverPD were on scene investigating. @IAFF18 @BC_EHS. Details on @CTVVancouver & @CTVMorningLive pic.twitter.com/0jyrpbmSYl