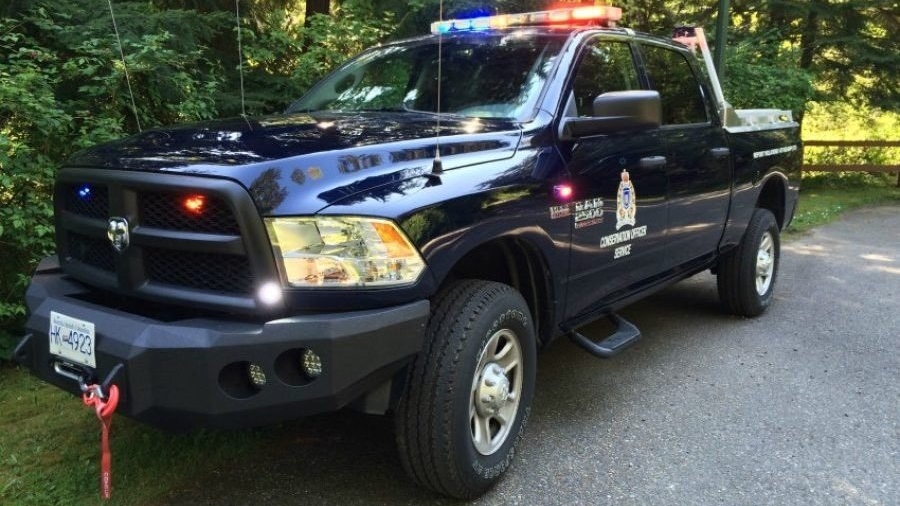 A B.C. Conservation Officer Service truck is seen in this undated image. (BCCOS/Facebook)

Two B.C. men have been ordered to pay thousands of dollars and were handed hunting bans in connection to the poaching of three moose.

The B.C. Conservation Officer Service said in an update over the weekend penalties related to a November 2019 incident were recently handed out.

The BCCOS said one man pleaded guilty to two counts of hunting without limited entry hunting authorization, and one count of failing to remove edible portions of meat. He was fined $7,500 and given a three-year hunting ban.

Another man was given a $5,500 fine and a two-year hunting ban after being convicted of the same offences.

BCCOS said, in 2019, witnesses reported seeing two men hunting for moose in the wilderness outside of Kelowna.

"A group of antlered moose was eventually spotted in a recently logged area," BCCOS said in its update. "Both men fired numerous shots at the moose, killing three. The moose killed all required an LEH authorization to be harvested."

According to BCCOS, the two men only took "one of the moose and left the other two behind."

In addition to their penalties, the two men will also have to retake the province's hunter education program and won't be able to accompany anyone hunting or go to a hunting camp.

Money from the fines will go to the Habitat Conservation Trust Foundation.

"Poaching is a reckless activity with a blatant disregard for wildlife," the BCCOS said.

"The Conservation Officer Service hopes these fines will help deter others from this unlawful activity."