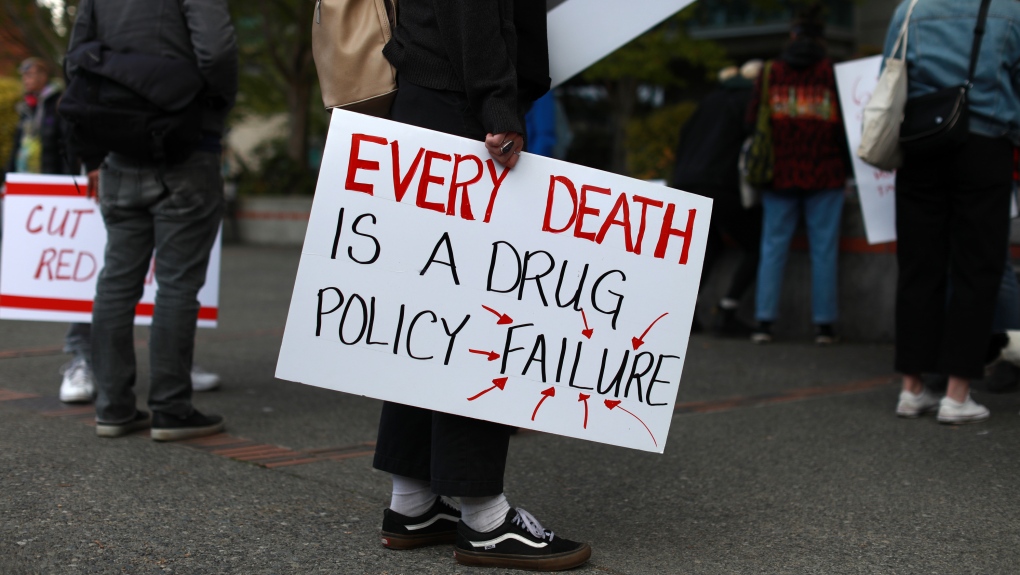 Moms Stop the Harm advocates and supporters gather at Centennial Square in Victoria on April 14, 2022. THE CANADIAN PRESS/Chad Hipolito

Dozens more British Columbians died from toxic substances in August, the province's latest overdose data shows, bringing the total number of deaths reported in the first eight months of the year close to a record.

A report from the B.C. Coroners Service, released Wednesday, revealed 169 people died of suspected overdoses in August. That averages about 5.5 deaths per day.

So far this year, 1,468 deaths from toxic drugs have been reported to the provincial coroner. The record for the first eight months of the year – reported in 2021 – is just one higher at 1,469.

"People in communities across B.C. are continuing to lose friends, family members and colleagues to the unprecedented toxicity of the unregulated drug supply. I extend my sincere condolences to all of those grieving the loss of a loved one."

“We are also the only province in Canada to decriminalize people who use drugs, so that we can remove the stigma and shame associated with substance use. We agree addiction is a health-care issue, not a criminal one," she said in a statement.

The province's preliminary data shows the highest number of deaths so far this year have been reported in the province's most populated health regions: Fraser and Vancouver Coastal Health. Together, those two areas account for 59 per cent of B.C.'s overdose deaths in 2022.

However, Northern Health is seeing the highest rate of overdose deaths at 52 deaths per 100,000 people. By comparison, the rate is 48 per 100,000 in Vancouver Coastal Health.

Other health authorities aren't immune to the crisis either. Over the weekend in Kelowna, which is part of the Interior Health Authority, five people died of an overdose in a nine-hour period.