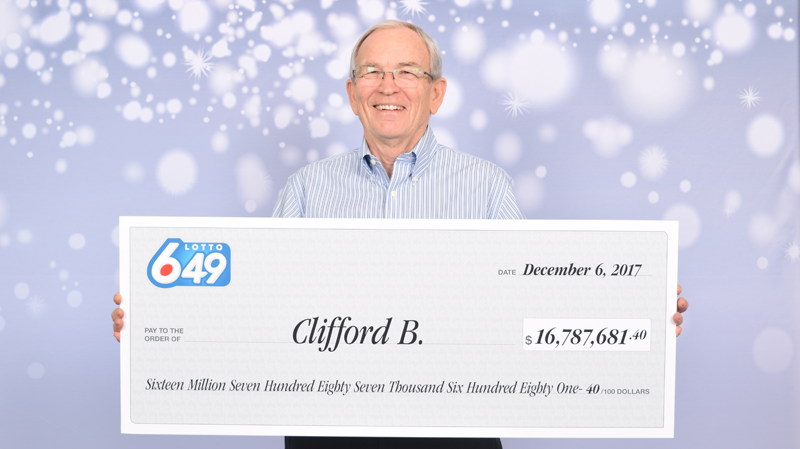 Even before he won a massive $16.7 million lottery jackpot, Clifford Britch considered himself a lucky man.

He has a loving wife, Ginette, and they share a close-knit family that includes children and grandchildren. Now, he has millions of dollars to share with all of them.

"This is really the icing on the cake," Britch said. "You spend the last 70 years kind of putting the cake together, baking the cake, now all of a sudden you've got a real thick slice of icing."

Britch lives in Kelowna, but came to the B.C. Lottery Corporation's Vancouver office Wednesday to pick up his oversized cheque and pose for photos.

He told reporters he purchased his winning ticket for the Nov. 22 Lotto 6/49 draw at Orchard Park Mall, then learned of his good fortune at a grocery store kiosk.

Britch originally misread the machine and thought he'd won $16,000, which was enough to make him call out to Ginette as she paid for their groceries at the checkout.

An employee soon came over and let him know the couple's news was much, much bigger.

Britch said they don't have any immediate plans for how to spend the money, apart from sharing it with their family, including their son in Metro Vancouver and daughter in Alberta.

The couple had already booked a cruise in South America over the winter, and they intend to follow through with that plan – though the trip will likely be a little cozier now.

"We might upgrade to a business class flight," Britch laughed.

While his habit of regularly purchasing lottery tickets paid off in the end, the odds of winning a jackpot are infinitesimal. According to BCLC, Lotto 6/49 players have a one in 14 million chance of matching all six numbers.