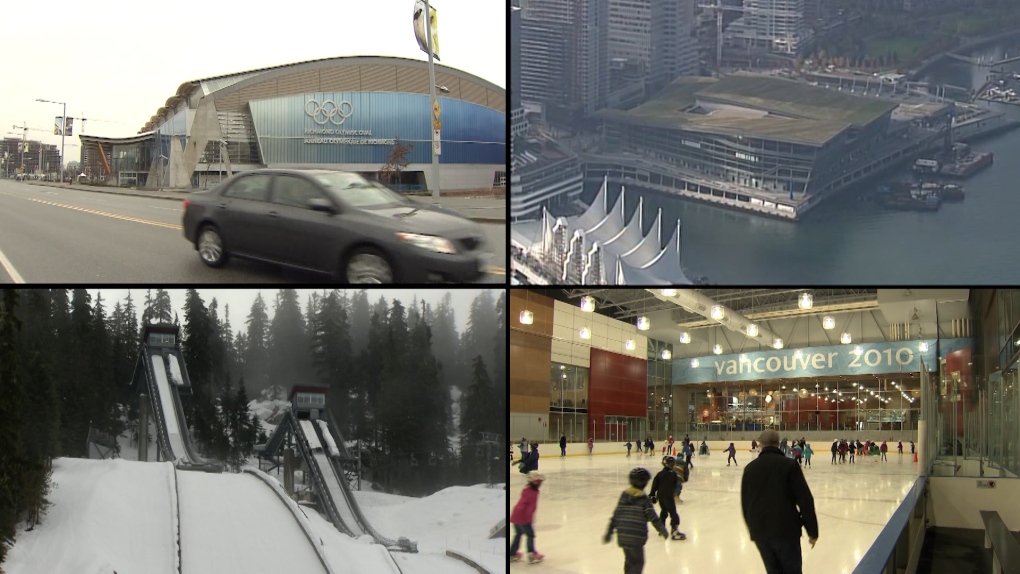 Ten competition venues were built or upgraded for the 2010 Games, with several others available as practice facilities for athletes. They range from the Whistler Olympic Park to the Richmond Olympic Oval 120 km away on the banks of the Fraser River.

VANCOUVER -- If success is measured by a surge in the number of international sporting events held at former Olympic facilities, they haven’t done well.

But those who foresaw the Winter 2010 venues becoming vibrant community hubs and tourist draws are delighted with what the past decade has brought.

Ten competition venues were built or upgraded for the Games, with several others available as practice facilities for athletes. They range from the sprawling Whistler Olympic Park, which was home to alpine events, to the Richmond Olympic Oval 120 km away on the banks of the Fraser River.

"We're not at capacity. We could always do with more," acknowledged Whistler Sports Legacies President and CEO Roger Soane.

His group is responsible for operating and promoting the alpine venue as well as the Whistler Sliding Centre, which hosts bobsleigh, luge and skeleton events and tourist experiences.

"We have three mandates: one is for sport, the other is for tourism and the other is for community and I'd say we're doing well in all three," said Soane. "We've got major sporting events still coming here every year, especially at the Whistler Sliding Centre."

There are only 18 venues in the world that can host frozen track events, but the alpine venue faces stiff competition from hundreds of Nordic venues, with large cities nearby to fundraise to host international competitions. Soane said a world championship can easily come with a $2 million tab for organizers.

"I don't know if they have much of a future to really animate those areas, which are kept alive by what VANOC did beforehand," said journalist and author Bob Mackin. He wrote a book on the 2010 Games' finances, "Red Mittens and Red Ink" and believes Whistler’s remote location and pricey accommodations will always keep it behind cities like Calgary, which have thrived as the national centre for alpine events.

“(VANOC) saw ahead of time that there was a risk they may not [be sustainable] so they pre-funded that. They had about $100 million trust account to keep those venues operating beyond the Olympics, to hand them over to community societies."

The Games Operating Trust accounts for 40 per cent of Whistler Sports Legacies' revenue, with the rest coming through tourism, as well as recreational and professional attendees. The Richmond Olympic Oval, meanwhile, draws about $2.5 million dollars from the trust each year and is thriving.

"Last week we had an international world cup fencing championship that was right here. People from as far away as Italy, France and Russia came here to compete," said Richmond Mayor Malcolm Brodie. "There's no way we could've generated that kind of interest without something very significant like the Oval."

Richmond took the unusual step of accepting some funds from the International Olympic Committee, but built the rest of the long-track speed skating venue with civic funds, fundraised millions to own the venue in perpetuity and is completely in control of its future use.

"We designed the facility taking into account what would we do with it for the entire life span, so 60, 80, 100 years out," Brodie explained. "That's what we looked at and once we figured out what we wanted to do with it in the long run we said 'ok, now we've got the first five years dedicated to the Olympics, how do we fit that in?’"

While the Oval still has long track equipment, it hasn’t been used since the Games and the footprint is now occupied by two skating rinks, basketball courts, a climbing wall and an Olympic museum as well as a conventional gym and other amenities that draw Richmond residents looking for a spin class in addition to world-class athletes competing in everything from badminton to wheelchair basketball.

The venue also gets about $3 million a year from the City of Richmond, but officials said it’s less than other community centres considering its size and attendance.

Four Vancouver venues are now overseen by the Park Board, with the structures welcoming thousands of users per week in their new iterations.

The busiest is the Hillcrest Centre, which was the competition venue for curlers, but now welcomes up to 30,000 people per week to use its gym, pool, curling rink, library, dance studio and other amenities. The Park Board says it sees some 2.5 million visits per year

The Killarney Rink had served as a warm-up centre for speed skaters, and has now been converted to an NHL-sized rink for community skating and hockey, while the Trout Lake rink that had welcomed practicing figure skaters has seen a gym, performing arts studio and multi-purpose rooms added to the site to enable community programing for seniors to infants. The Creekside Recreation Centre is a popular venue for weddings and other special events, while also the site of a public gym and other amenities.

Meanwhile, the Vancouver Convention Centre, which has been seen as a boondoggle with a price tag that had ballooned to nearly $900 million – double the initial cost estimate – has seen its own success. Once the home to the International Broadcast Centre and the thousands of journalists reporting on the Games, the venue has seen thousands of events from Aritzia’s wildly popular annual warehouse sale to large-scale conventions and events that wouldn’t have been possible in the old convention centre space.

"With the addition of the West building that tripled the facility’s capacity, the Convention Centre has welcomed over 9 million guests from around the world and generated over $2.4 billion in direct spending for British Columbia in 10 years,” said a spokesperson in an email.

BC Place, which saw extensive upgrades to host the opening and closing ceremonies, attracted the FIFA Women’s World Cup and the Canada Rugby Sevens since the Games. The two tournaments are widely believed to have selected Vancouver based on the city’s Olympic pedigree and the amenities that come with it.