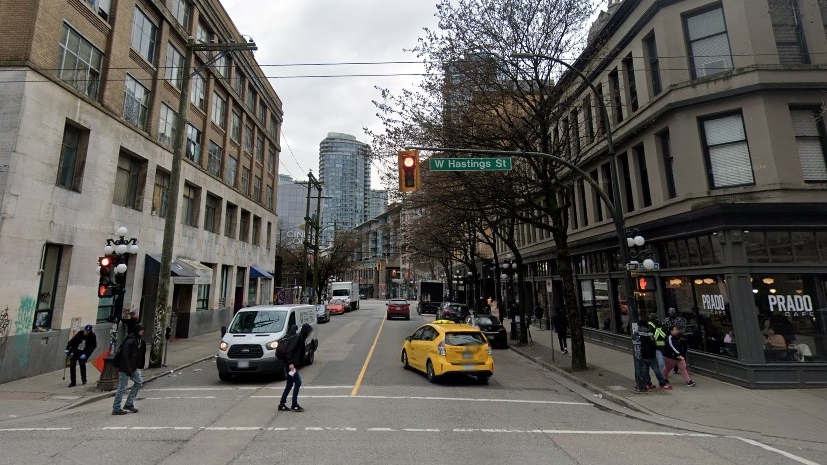 The intersection of Abbott and Hastings streets is seen in a Google Maps image captured in February 2022.

Police are investigating a possible stabbing in Vancouver's Gastown neighbourhood that left one person in hospital Wednesday afternoon.

Few details have been confirmed, but the Vancouver Police Department said officers responded to a possible stabbing in the area of Abbott and Hastings streets.

"As of now, the suspect is still outstanding," spokesperson Const. Tania Visintin said in an email.

B.C. Emergency Health Services told CTV News paramedics were called to the area shortly before 3 p.m. and transported one person to hospital.

This is a developing story and will be updated.

Quebec Cardinal Marc Ouellet is being accused of sexual assault in a class-action lawsuit against the Roman Catholic Archdiocese of Quebec.

The House of Commons Public Safety and National Security Committee is set to meet today to discuss allegations of political interference in the 2020 mass shooting in Nova Scotia.

Canada's inflation rate slows to 7.6 per cent in July as gas prices fall

OPINION | Economists are forecasting a recession, how should you prepare?

Explosions and fires ripped through an ammunition depot in Russia-annexed Crimea on Tuesday in the second suspected Ukrainian attack on the peninsula in just over a week, forcing the evacuation of more than 3,000 people.

'At the mercy of this whale': B.C. couple had dinghy lifted by humpback during hours-long encounter

A Vancouver couple was in awe and a bit scared during an hours-long encounter with a whale on B.C.'s Central Coast, much of which they captured on video.

A mother from Florida shared an adorable video of her son's interaction with the family's dog.

As heat waves become more common and extreme due to the effects of climate change, the data centres that provide the backbone for the online services the public relies on are at risk of overheating.