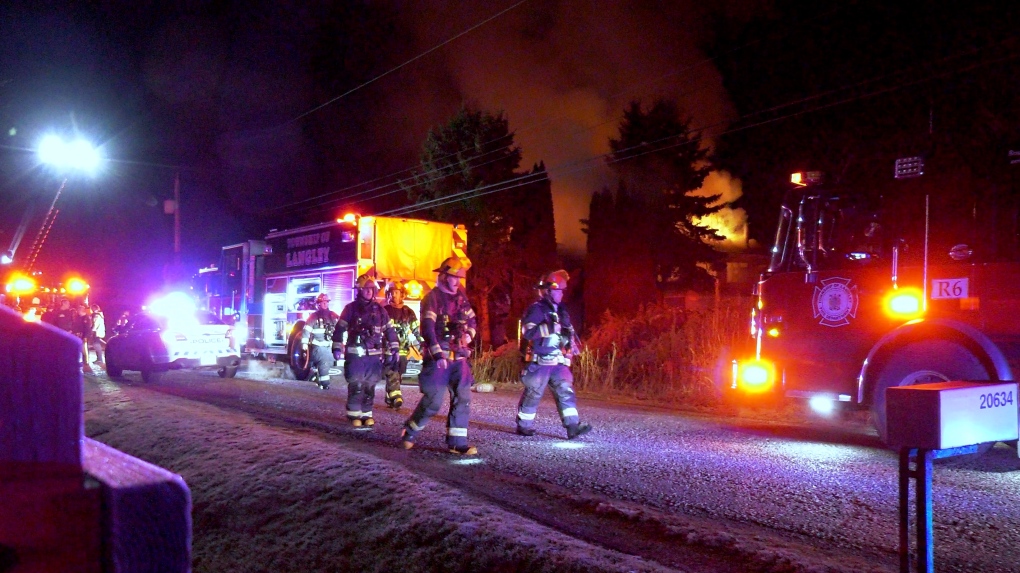 A fire in Langley gutted a home Thursday morning.

LANGLEY, B.C. – A man has died after an intense two-alarm fire tore through a Langley home early Thursday morning.

Township of Langley fire crews got the call around 2:15 a.m. When the first crew arrived, they quickly upgraded it to a second-alarm fire.

Flames could be seen shooting out of the roof of the house on 74B Avenue near 206a Street.

"When we arrived we found this single family dwelling with fire heavily involved in the roof and the upper floor," said Monty Armstrong deputy fire chief with the Township of Langley.

Fire crews started by attacking the fire from the outside and used an aerial truck reach the flames on the roof. At the height of the fire, there were 24 firefighters on scene.

There were five people living in the house, which got significant damage on the top floor. At least two other people were taken to hospital, while two more were seen outside the house with blankets.

Fire crews, RCMP and the coroner are all investigating, but they say it's too early to tell if the fire is suspicious.

No other details have been released about the man who died from the fire and there is no word yet on what caused the blaze.

A two alarm blaze has gutted a home in Langley on 74B ave near 206a Street. Flames were shooting out of the rooof. @TOLFireFighters knocked down the blaze. Now checking for hot spots. Details on @CTVVancouver & @CTVMorningLive pic.twitter.com/y6UR6hJv4u